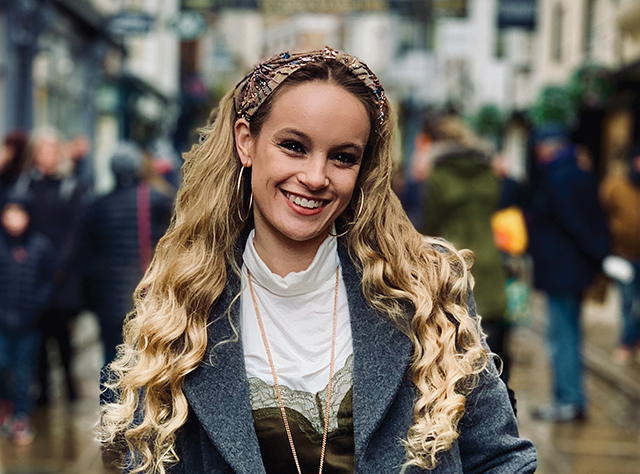 Author Lydia Sanders has launched a series of books for children that tell the stories of remarkable women from history.

The Herstories books give readers aged 6-12 an introduction to a number of notable women from all historical eras, from Boudicca to Coco Chanel. The first title in the series focuses on Marie Curie, who received two Nobel prizes for her scientific discoveries.

“I wanted to begin with a lady who was recognisable but didn’t stereotypically have a job that women do,” explains Lydia.

“Everyone knows the name Marie Curie but don’t really know her background. The reason I’ve chosen the women I have is because they are ordinary women, they didn’t come from anything spectacular, but through hard work they achieved extraordinary things.”

Twenty-three-year-old Lydia, who lives in Lincoln, says that her enthusiasm for telling stories comes from spending time with her cousins.

“I’ve got 14 cousins and they’re all younger than me. I used to babysit them a lot and I’d tell them bedtime stories. I’d often tell them the herstories and they’d always ask questions about the people, rather than the historical context.

“I started telling them about women because I’d watched a documentary on television about Clara Bow. So I wrote a story about her and read it to my cousins and they were asking things like, what colour her eyes were, and whether she had any brothers. They were interested in the people themselves, so I decided to make it into a longer story. And started researching more women from there.”

A graduate of Durham University, where she studied Modern Foreign Languages, Lydia was considering her employment opportunities when the Covid pandemic hit in 2020.

She describes the first lockdown as a “blessing in disguise” as far as her own creative path was concerned, as it gave her time to write. With encouragement from her university tutors, family and friends, Lydia decided to launch the books as a self-published series.

“I decided to set up my own publishing house because I thought that way I could work on my own timeline and work to my own strengths. I also like doing the self-promotion and in the future I wish to help other authors and writers bring their stories to life as well.

“I’ve had a lot of support from my mum, who runs an accountancy business. It has been a lot of hard work but I’ve loved the challenge.”

“My grandad read an article about her. She illustrated Dani Dyer’s autobiography and you could tell that it was Dani Dyer. I told her I was writing a children’s book and I wanted an illustrator who would make these people look recognisable. I wanted you to see the Marie Curie illustration and think, yes that’s Marie Curie. I write everything first and send it to Eleanor saying what I want – and she does an excellent job. I can’t draw for toffee!”

Beginning with rhyming verse to give young readers an overview of each book’s subject, Lydia also includes useful timelines, maps, a more in-depth profile of each woman, and a glossary of helpful terms.

“I love writing in rhyme for small children, making words and language fit together like a puzzle,” says Lydia.

“People have been really kind and said it’s really well set out, beginning with a poem first. I wrote the books specifically so that children could enjoy them even if they don’t like reading. You can only read the poem if you want to and you don’t have to read the rest of the book but you can if you want to delve a little deeper into these women’s lives.

“I’ve had a lot of feedback from local parents and teachers saying, so and so was asking me about the Nobel prizes that [Marie Curie] won. That is so heart-warming. I don’t want them to look at Marie Curie and think, I could never be like her. I want them to read my books and think, that could be me.”

In the months ahead, as lockdown restrictions are eased further, Lydia says she is looking forward to returning to bookshops and engaging with schoolchildren through talks and collaborative projects.

“It’s great doing it on Zoom and it’s great what technology has afforded us throughout the year but I can imagine it’s not very fun for the children. So I’d like to be able to go into the schools and see them and talk to them in person.”

She is also fascinated by the production process behind the elegantly produced Herstories books and plans to visit the printers when she is able to do so. “They are based in Norfolk. Everything about the books is done by people in the UK.”

The next books in the series will focus on Coco Chanel, Ada Lovelace, Boudicca and Rosa Parks, highlighting the vital contributions that women have made to science and technology, politics and fashion. Lydia says that she continues to deepen her historical knowledge all the time through independent study, with the books reflecting her own learning process.

Lydia also encourages her readers to get in touch via the Hysterical Herstories website to submit ideas for possible subjects.

“I’ve had a few suggestions for Jane Austen and Mary Anning, they’re quite popular. I did a school talk and was talking about Boudicca and I had a boy put his hand up over Zoom and he said there was a lady in Greece and she was a warrior as well. It’s really nice when children come up with ideas themselves.”

The Herstories books are available to order online at www.hysterical-herstories.com

Norma Procter – Her Life in Music

Taken over by poetry

Big savings when you take out a subscription.

DOWNTOWN COMPETITION: YOUR GLORIOUS GARDEN IMAGESAre you proud of what you’ve accomplished in your garden or outside space during 2020 & 2021? Have you grown something amazing, built the perfect arbour, created a sumptuous lawn or a snug sunspot packed with beautifully planted pots? Did Downtown Garden Centre help – with the seeds, a fantastic new lawnmower, some luxury garden furniture or smart looking gravel or slate for walkways? You took a photograph... right!? In Spring 2022 we’ll be launching the Downtown Spring Magazine in conjunction with Lincolnshire Life Magazine and we’re looking for a wonderful front cover shot. T&Cs apply. To see full details of Terms and Conditions which apply to entries submitted for this competition go to: www.oldrids.co.uk/spring-garden-competition ... See MoreSee Less

We use cookies on our website to give you the most relevant experience by remembering your preferences and repeat visits. By clicking “Accept All”, you consent to the use of ALL the cookies. However, you may visit "Cookie Settings" to provide a controlled consent.
Cookie SettingsAccept All
Manage consent

This website uses cookies to improve your experience while you navigate through the website. Out of these, the cookies that are categorized as necessary are stored on your browser as they are essential for the working of basic functionalities of the website. We also use third-party cookies that help us analyze and understand how you use this website. These cookies will be stored in your browser only with your consent. You also have the option to opt-out of these cookies. But opting out of some of these cookies may affect your browsing experience.
Necessary Always Enabled
Necessary cookies are absolutely essential for the website to function properly. These cookies ensure basic functionalities and security features of the website, anonymously.
Functional
Functional cookies help to perform certain functionalities like sharing the content of the website on social media platforms, collect feedbacks, and other third-party features.
Performance
Performance cookies are used to understand and analyze the key performance indexes of the website which helps in delivering a better user experience for the visitors.
Analytics
Analytical cookies are used to understand how visitors interact with the website. These cookies help provide information on metrics the number of visitors, bounce rate, traffic source, etc.
Advertisement
Advertisement cookies are used to provide visitors with relevant ads and marketing campaigns. These cookies track visitors across websites and collect information to provide customized ads.
Others
Other uncategorized cookies are those that are being analyzed and have not been classified into a category as yet.
SAVE & ACCEPT
Powered by